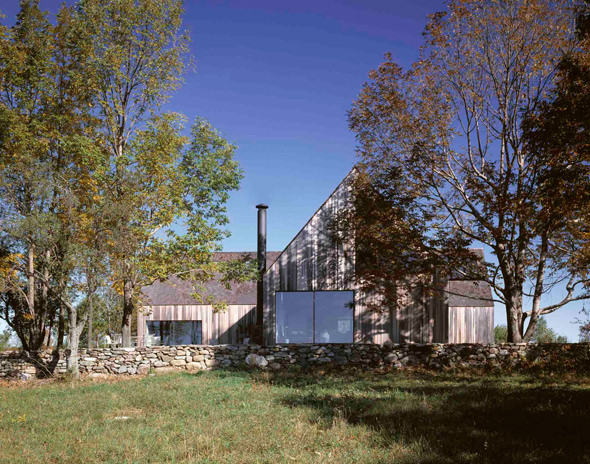 SKY HOUSE
Edward Larrabee Barnes Influence: Ed Barnes’s high-rise projects are typically monolithic unadorned masses with one or two major strokes to create levity and sculptural interest. As in the IBM Building in New York City with its attached winter-garden, the low-rise appendages were often fully glazed with his signature saw-toothed roof forms. Sky House, an imposing 54-story mass adjacent to an ensemble of historic ecclesiastic structures in a garden setting, was consciously conceived as a minimalist and scale less tower to ensure its background presence and not be overpowering. Composed of three nestled volumes, each with its own identity expressed with Barnes-like ribbon, square, or vertical fenestration in iron-spot masonry, the building is a study in restraint. By setting the tower back from the street-line, the three-story parish house at the base was enabled to express its own identity and maintain a scale that links it to the church ensemble. The glazed saw-tooth façade and roof monitors were clearly inspired by Ed’s work.

ZIEGLER HOUSE
Edward Larrabee Barnes Influence: The Ziegler House was designed shortly after I left the employment of Ed Barnes (8 years) and started my own firm, FXFOWLE (formerly Fox & Fowle). The assemblage of simple barn-like forms with no overhangs was clearly influenced by the Heckscher House in Mt. Desert Island and other of Ed’s residential and private school designs. Minimal fenestration, triangulated clerestory windows, and all-glass connectors—all strategically positioned to maximize views and daylight and link interior volumes to the natural world—were moves that Ed had developed and mastered over his career. The clarity of circulation, pinwheeling, and interplay of spaces and light were his trademarks.

TAYLOR HOUSE
Edward Larrabee Barnes Influence: This project was designed several years before the architect joined Ed Barnes’s firm. Strongly influenced by Ed’s Righter House on Fishers Island and the stilted individual units of Haystack Mountain, the house is perched on the bluff as a singular shed-roof object directed toward the water and scaled to the island’s fishing-shack/beach-house vernacular of the time. The minimalist ensemble of fenestration elements, strategically placed for views, ventilation, and spatial enhancement through day lighting, are variations of the signature components of Ed’s houses. The clarity of the axial circulation that threads through the house is typical of an Ed Barnes parti.