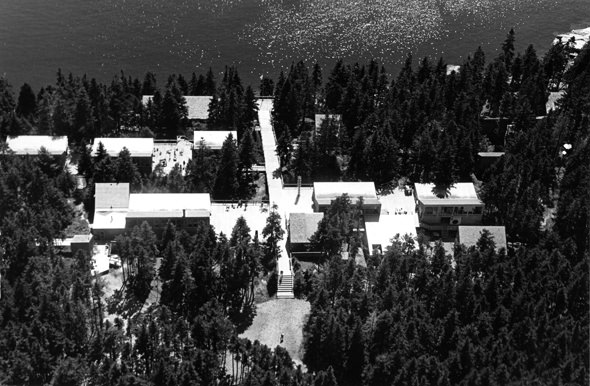 One of the happiest jobs of my career was Haystack—an arts and crafts summer school on Deer Isle, Maine. I remember first walking onto the site and looking down the rocky wooded slope to the sea. I wondered whether we should build at the top or down near the shore. Then it came to me: we could build on the slope, with a long flight of steps perpendicular to the horizon. Studios and sleeping units would branch out from each side.

The site is absolutely beautiful—tall spruce trees against the sea, granite slopes, moss, and lichen. The buildings, set on stilts, are interspersed with wood decks. The idea was not to disturb the ground in any way. There are two basic building types: sleeping units with ribbon windows facing the sea and peaked windows on the sides; and studios with tall windows for north light and, again, ribbon windows, facing the sea. (These forms were adapted from an idea I had had for a studio a few years before—a simple volumetric form combining triangular and square geometry.)

It became apparent that we were designing a village with a main “street” leading to the sea, dining hall and offices at the top, studios and decks branching out on the side streets, and clusters of living units nestled in the woods. The design provides separation for work and living. The cost in 1960 with only rough studs inside was about five dollars per square foot.

Haystack is now over thirty years old—years of hard wear, reshingling, additions here and there, including a foundry. One of the side streets was extended to add more cottages. In 1979 we build a visitors center and parking to direct the many summer visitors, and their cars, away from the front door. With all of this, Haystack remains a wonderfully poetic place to teach and learn. In 1994 Haystack received the American Institute of Architects Twenty-Five-Year Award.