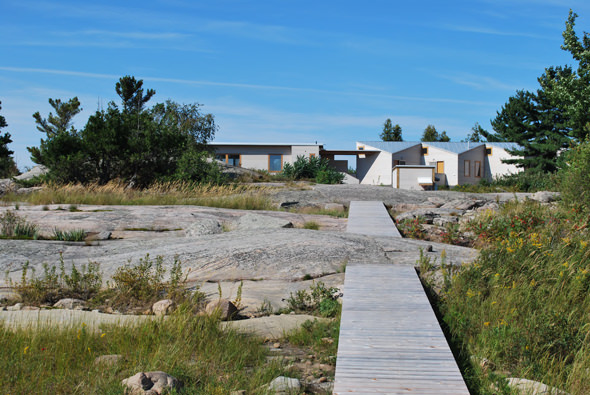 The most striking memory I have of the Mountain School of Crafts is how Edward Larrabee Barnes’s basic wood structures attach to the hillside in a village-like configuration that follow the site’s sloping contours.

Haystack’s deference to the local vernacular and landscape informs the design approach for Runaway Island on Parry Sound, Ontario. Rather than the rolling topography of Deer Isle Maine, the north-south striations of glaciated rock establish the island-cottages’ orientation. Geometric forms in balloon frame resemble the fishing huts that Georgian Bay fisherman use as home base.

Despite the open environment, the “bunkies” low profile makes them almost invisible on the horizon, maintaining a discreteness that is reminiscent of Barnes’s treed-in village.

Respect for site singularity is manifest not only in modesty in form but also functionality in plan. Runaway Island’s simple interior and exterior layout conveys a sense of easy movement across an otherwise bare and slippery terrain.

The resulting balance between reassuring order and protection on the one hand, and raw exposure on the other, is a hallmark of Haystack, with its network of straight-running boardwalks that encourage engagement with the outdoors.