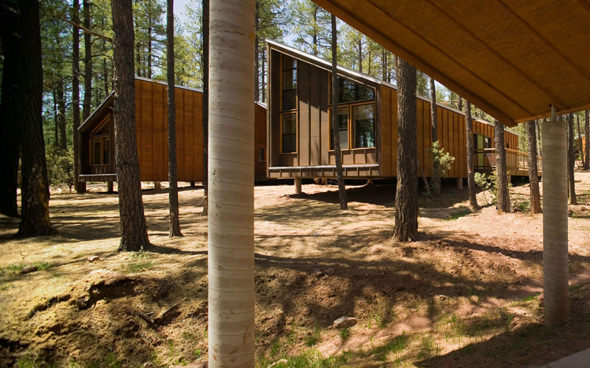 Whispering Hope Ranch is a camp for children with special medical needs located in the ponderosa pine forest in the Arizona Highlands. With its streams, meadows and views, the Ranch provides a welcome respite from the extreme summer heat of the Phoenix Valley. An extensive path system connects the many features of the forty-five acre site allowing children to wander freely and to have therapeutic interactions with the rescued animals that also reside at the Ranch. The site posed many challenges including poor soils, excessive slopes and overgrown forested areas making it vulnerable to erosion and fire. The combination of strong sunlight and summer monsoon rains also had to be considered. The program includes a dining hall, administration offices, single and double cabins and an infirmary. The camp’s many structures are organized through a sloping shed/butterfly roof motif providing large porches for camp activities. Natural materials such as western fir and pine are used throughout, cladding and framing the structures in a manner similar to barns and outbuildings used by local settlers.

Edward Larrabee Barnes’s design for Haystack was an inspiration for the project. With its simple sheds and terraced decks, it demonstrates how architecture can strike a balance with the natural environment; combining the rugged qualities of a forested New England coastline with abstracted forms inspired by the local, cedar- shake-clad fisherman’s shack. The linked, public spaces created by the decks and stairways at Haystack were also an inspiration for the porch/decks used at Whispering Hope Ranch. Connected by a looped path system that winds its way through the forest, the decks form a chain of public spaces that distributes activities throughout the site rather than concentrating them in a single place.

This project demonstrates the ongoing relevance of Ed Barnes’s idea of “responsive modernism” where formal clarity and clear organizational principles are juxtaposed with the rich complexity of the natural environment.